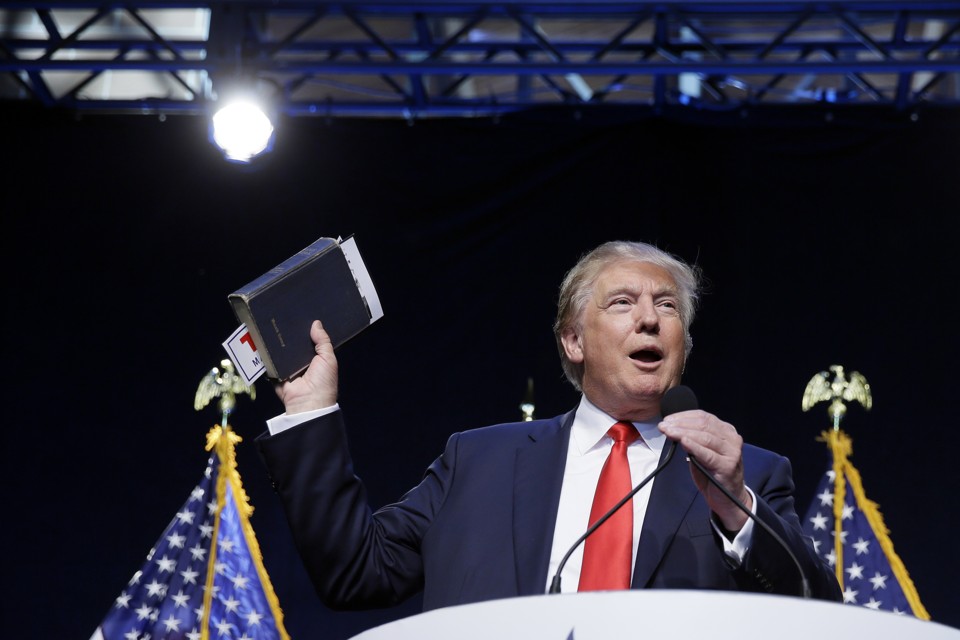 Jerry Falwell Jr., president of the largest evangelical college in the world, Liberty University, has not only endorsed Donald Trump in the presidential primaries, but has also actively campaigned for him. I can understand that some of my brothers and sisters in the faith see Trump as an alternative to something worse, though I beg to differ with their views.

What I can’t fathom, though, is enthusiasm for a man who seems the Sermon on the Mount’s antithesis. Trump is brash, arrogant, and at times downright crude. His speech regarding migrants, refugees, immigrants, the poor, and the downtrodden in general has been spiked with contempt.

Of course, he is a successful businessman, and maybe that gives him some credentials for leadership, but much of his money was made in ways that don’t exactly resonate with Christian virtue. The man is best known for his reality television shows and casinos that feature not only gambling, but strip clubs, too. Dig a little deeper, and one finds his business style is marked by an uncharitable degree of egotism, bullying, and ruthlessness.

Unfortunately, American Christians are easily manipulated. Way back when Jerry Falwell Jr’s father was first coming to national prominence, touting something called the Moral Majority, American Christians were led into a culture war. Many believed that our country was falling away from its Christian roots, and the “majority” needed to stand up and make its voice heard.

Reclaiming our alleged spiritual heritage and gaining political clout was supposed to bring revival to this depraved land. We backed candidates who gave lip service to ending abortion and other moral causes, and too many Christians became single-issue voters in an increasing complex political world.

We wound up losing the culture war anyway. Not only has abortion continued to be legal, but gay marriage is now the law of the land. In the meantime, our own churches are rife with sexual immorality, divorce, scandal, materialism, and greed. America doesn’t need a new type of politician to implement reform from the top down; our country needs average Christians who truly believe Jesus is Lord and live their lives accordingly, which could transform society from the bottom up.

Back in the 80s when the Moral Majority was flexing its muscle, I was part of a campus ministry at the University of Maryland. When I tried to share the gospel of Christ with a particular student, he completely dismissed the message, vehemently proclaiming that the church was a hypocritical institution with a political agenda.

I told a brother who was with me at the time, that if real persecution came to Christians in America, it wouldn’t be because of our faith in Jesus, but because of our political allegiances.

I hope I wasn’t right about that.